Near and dear to our hearts – and an important component of The Visone
Method – is a classroom that is peaceful, one that builds a cocoon around the children
held within its shelter. 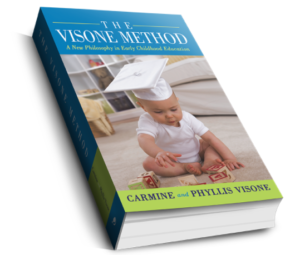 Today, perhaps more than ever-before, children need to be able to come to a
classroom that embraces a peaceful environment. Since 9/11, television news – and
other media – has been filled with talk of terrorism-based violence. For the children
growing up in this new world, the awful reality is that violence and terrorism lurk
everyday. While it would be a mistake to ignore this reality, we must let children know
this is not how the world should be. Violence, fighting, war – there are alternatives.
Teaching children how to resolve conflict at an early age is a wonderful start.
The learning environment at school must feel safe. The reason The Visone
Method strives for a peaceful classroom – in addition to the rest of the child’s life – is
simple math. A child who is stressed due to factors beyond their young control will not
learn well – or fare well on any level.

Children learn best in an environment that offers them support and predictability.
A peaceful classroom allows them to comfortably interact with others, building upon
positive interactions that empower them. A happy, safely nested child is more easily
taught.

Lacking the experience and vocabulary to express themselves and without the
aide of a deeply caring teacher to help turn their feelings around, children who are
fearful develop low self-worth. Therefore, it is of prime importance that the classroom be
a safe, nurturing environment where children are happy to be and happy to learn.
Today’s children are bombarded with violent messages – from seemingly innocent
cartoons and movies to video games, and even, unfortunately, right in their own
neighborhoods. Violent language and behavior surrounds them, shouted from every
screen and in many schools. It is shocking to realize that children as young as four or
five think about violence, but many do.

The ideal would be to change society so that our precious young children do not
face the stresses of violence. However, this is a task not simply accomplished.

Realizing this, The Visone Method has taken up the torch to promote Peaceful
Classrooms. Showing young children better ways to manage or sidestep conflicts – in
the classroom, in the neighborhood or at home – is essential.
As people who care for and about young children, we know it is our duty to be
vigilant. The societal acceptance of violence has become both very bold and very
subtle. In 1984, the Federal Communications Commission deregulated children’s
programming. Since that date the quantity of violent content has escalated.
Even parents who say they are non-violent buy into the concept of violence by
giving their small children lunchboxes and T-shirts with crass characters and sayings.
This kind of merchandise has become standard fare in stores and homes across the
nation. Often, these negative messages spill over into the classrooms of our youngest
children. The message is not lost on our littlest ones (remember, they are little
sponges).

Children learn right from wrong from the adults in their lives. In the classroom,
children should be able to rely on the teacher to be kept safe. This security allows them
the freedom to discover.

Visone Method teachers and staff practice peacekeeping methods in the
classroom, methods that the children can take home with them to put into action in their
lives outside of their school.

It is our recommendation to initiate lessons about conflict by using language and
concepts the child can grasp on their own developmental level. Teachers should try to
understand each child’s perspective. In the case of conflict with another child, both
children should be given time to tell their story without being interrupted.
A Peaceful Classroom builds trust. Trust allows room for acceptance and
learning.

Killing Is Never A Game

The value of toys is that they are tools to prepare young children for the grown-
up world. According to a New York Times survey, the sale of toys dropped two percent
recently because “children are getting older, younger.”

Video games, the Internet and other technological gadgets are given to children
at younger and younger ages. This unto itself would not be a concern except for what
the children are being exposed to as a result – violent messages are often the accepted
norm. The inappropriate content of these games overshadows any benefits a child gets
from using the technology, such as hand-eye coordination.

Yes, we must make children feel safe. Especially in the classroom, we must give
them support when a family member has been victimized by violence. We can’t pretend
that violence doesn’t exist and stick our heads in the sand hoping we won’t have to face
these tough issues. However, we must also put this grown-up topic into perspective.
Killing is not a game. To feature it in a game treats it too casually – or, on the
other hand, glorifies it. Either way, it sends the message that life has little value and
desensitizes children to real life violence. No wonder crime rates are up!
Allowing innocent babes to play games that feature violence and murder will not
permit them a healthy perspective! A Visone Method classroom would no more tolerate
violent games than they would allow physical violence.

The Visone Method also does not condone pretend gun play – not toy guns and
not even “finger” guns. Guns kill. Children must learn this simple lesson early on.
Children use play to try things on like grown-up behaviors, as well as to try out new
skills and role-playing. What kind of adults will children become if they think guns are
“play?”

It is important that parents remain vigilant so that what their children learn in
school is reinforced at home. Violent so-called super heroes should be banned;
powerful real-life heroes should be substituted – scientists, teachers, firefighters.
Choose toys that stretch the child’s imagination and creativity vs. toys that do the
work for the child or expose him to video games that feature violence. The graphics
associated with violent games are very vivid. Research shows that children who play
these games mimic the characters vs. using their imaginations.

Clay, paint and paper, costume boxes, musical instruments, toys to build with
and the like add so much to your child’s development as they wonder, “What can I do
with this?”

The violent culture our children are exposed to has an enormously negative
impact on their psyches.

Planet Peace: Teachers have amazing opportunities to shape harmony in the class

Of course, just as in the real world, not everyone will get along every day. This is
where a teacher can truly affect change, role-modeling behavior that creates a peaceful,
positive atmosphere in the room. We may not always agree with each other – this is
normal. How we work out our disagreements is the key – through respect, kindness and
manners. Assuming these behaviors are not always easy to put into practice, there is
where seasoned Visone Method teachers shine by demonstrating, through actions and
words how to resolve conflict and keep peace appropriately.

A Visone Method teacher will model ways to state feelings without becoming
violent or using harmful language. Children learn through these behaviors that the
outcome of resolving conflict peacefully is positive: All parties win.
Before children can put conflict resolution techniques into practice, they should
be taught some rules about safety and classroom procedures and the reasons for these
rules. They should also be exposed to other’s cultures. In addition, they should be
allowed a place to discuss their own fears and what they need to feel safe in the
classroom.

A Visone Method teacher will talk to their students respectfully, including them in
decision-making on age-appropriate levels and helping them to use good judgment.
Teaching these important lessons benefits the teacher as well as the child: a classroom
filled with respectful children is disciplined. Think how much better a teacher can teach
when children behave respectfully.

One way to teach children to be peacemakers is to help them develop
compassion and responsibility. Allowing them the opportunity to say “I’m sorry” when
they have misbehaved accomplishes just this.

When children are taught why they should be sorry for hitting, yelling, being rude
or being defiant, they develop compassion and the ability to see things from other’s
perspectives culturally, religiously, politically. Putting voice to their newfound
compassion means they have taken responsibility for their actions. Then children can
understand why shoving someone in the playground, bossing a sibling around or hitting
a classmate doesn’t work.

With these elements, children are well on the path to resolving conflict
responsibly for the rest of their lives. Problem solving skills that children learn at a
young age will remain with them when they become adults battling it out in the
boardroom.

Young ones in a Peaceful Classroom are learning how to be peacemakers on the Planet Peace. We cannot entirely shelter children from violence, but we can do everything we
can to teach them that there are alternatives. The Visone Method firmly believes that
the world can change one family at a time, one community at a time – one child at a
time.

While we pray that the world enjoy global peace, we try to care for our little
corner of the world, which means caring for our children in a peaceful classroom
environment.